In cities across the U.S., multifamily developers are finding that building less is doing more.

As rents have increased and urbanization has intensified, developers have responded with smaller apartments, and new analysis shows those efforts are paying dividends.

After lagging behind bigger units earlier this decade, the vacancy rates for the smallest 25% of one-bedroom units have dipped below those for medium and larger units, according to CoStar. This is a reversal from earlier in the decade, when the largest 25% of units posted the lowest vacancy rates and the smallest 25% saw rates above 7%, CoStar consultant Robin Trantham told Bisnow. The average unit completed last year measured 941 SF, according to RENTCafé. That is 5% less than the average of 10 years prior.

“Smaller units have been gathering an outsized share of demand, especially in urban submarkets in major metros, which is simply due to the fact that rents are far above where they were at pre-recession highs, and these major metros have become really expensive,” Trantham said. “Renters choosing to live in the city have had to sacrifice square footage in order to do so.”

Exactly how the size of floor plates has correlated with the level of occupancy is a topic less explored. As a result, CoStar looked at how various sizes have performed and released its findings in August.

“I decided to take it a step further and look at vacancy rate by size to get an idea at least partially as to why developers are building smaller units today,” Trantham said.

Building smaller units is a clear extension of the myriad reasons renters are wanting to live in them. Urbanization has pushed rents up, and developers and residents alike have found smaller units satisfy each of their respective needs, Panoramic Interests owner Patrick Kennedy said. Based in the expensive San Francisco Bay Area, Panoramic specializes in small studios, one-bedrooms and two-bedrooms. Its average two-bedroom is about 440 SF, or “smaller than a lot of studios,” as Kennedy put it.

“Any place that has high rental costs can always benefit from the construction of smaller units because of the lower rents,” he said. 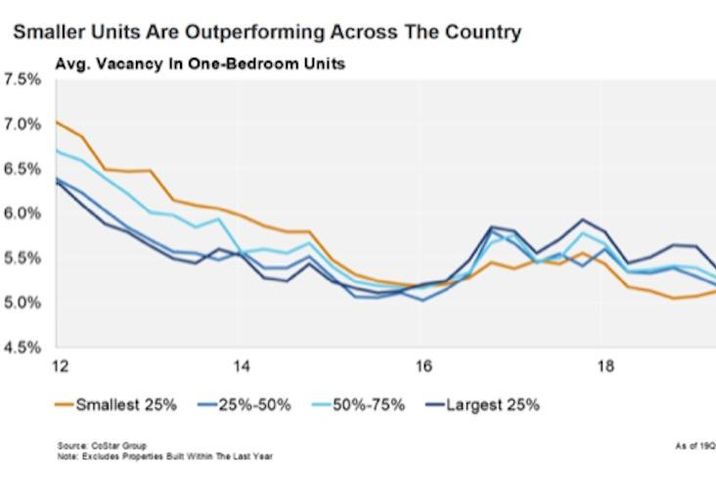 For that reason, the performance of smaller floor plates in what CoStar defines as core markets — Boston, New York, Chicago, LA, S.F., Washington, D.C., and Seattle — is where the trend is most pronounced. That has buoyed Panoramic, which just received approval for Oakland’s largest multifamily project ever, located in West Oakland, just a BART stop away from downtown San Francisco.

The vacancy rate of the smallest quartile of one-bedroom apartments in those eight core markets has nearly dipped to below 3%, compared to above 3.5% for the largest quarter of one-bedrooms, according to CoStar. 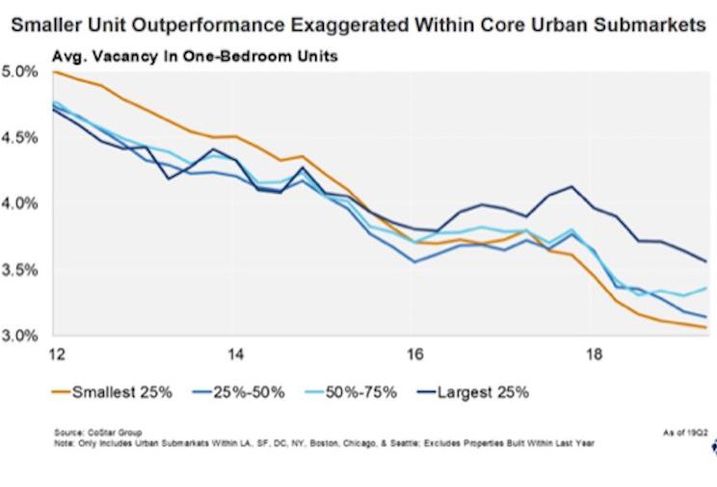 The trend has also spawned the sudden rise of niche multifamily property types. In Seattle, for instance, an influx of micro-units has aligned with the city besting New York City in having the smallest average apartment size (711 SF), according to RENTCafé. To live and work in Seattle, residents are sacrificing square footage for cost, and doing so fairly happily, Spectrum Development Solutions principal Jake McKinstry said.

“We’ve seen a shift not just in Seattle, but regionally, of people from baby boomers to millennials looking for value in the marketplace where they can live in an apartment that’s reasonably sized,” he said. “Really they use the front door of their apartment as their amenity.”

Spectrum itself has capitalized on the movement to smaller apartments, offering mostly studios and one-bedrooms. That had led to projects like Reverb, an 85-unit apartment complex in Seattle, that taps into the middle class’ need for housing in the Pacific Northwest.

Along with micro-units, Seattle is also joining New York City (and possibly San Jose) at the forefront of co-living development, which Simon Baron Development President Matthew Baron said he believes to be another manifestation of the success of smaller units. The We Company plans to put the third location of its co-living spinoff, WeLive, in Seattle.

Based in New York, Baron and fellow Simon Baron Development co-founder Jonathan Simon helped launch Ollie, the operator of the country’s largest co-living property. Dubbed ALTA LIC, it has brought co-living and smaller units to Long Island City in the borough of Queens.

Recently completed, ALTA LIC consists of 466 units, 169 of which are split into about 422 SF co-living bedrooms.

To Baron, the site’s success is a sign that smaller units are more than a flash-in-the-pan trend — in part because of what Simon Baron Development has found to be a surprisingly broad customer base.

“We sort of envisioned a market that would skew younger, around 22 to early 30s, maybe single, and don’t need as much space and [are] cost-conscious,” he said. “There is a large subset, almost 30%, of people that fall way outside that demographic: empty nesters, older professionals, divorcees and a bunch of other types. This is another way that the residential market is reinventing itself and catering to a need that is out there.”

There is need on the supply side as well. Soaring construction costs, especially in the Bay Area and New York, are keeping more and more projects from penciling. The more appealing unit economics of micro-units, co-living or just smaller floor plates are becoming clearer by the project, Newmark Knight Frank Executive Managing Director David Behin said.

“Developers doing ground-up have taken note of the higher value per SF of densified apartments,” Behin said. “Land and construction costs have gotten more expensive, so developers building with efficient floor plates [have] only helped the bottom line.”

That point and the rising costs lead Kennedy and others to predict smaller apartments will continue to do well for the foreseeable future.

“It’s always the best idea to build the smallest apartment that fulfills the needs of the tenant, and thus provides the lowest possible rental costs,” Kennedy said. “That’s a truism that I think is true in good times and bad, in any city.”